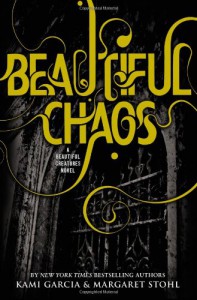 Ethan Wate thought he was getting used to the strange, impossible events happening in Gatlin, his small Southern town. But now that Ethan and Lena have returned home from the Great Barrier, strange and impossible have taken on new meanings. Swarms of locusts, record-breaking heat, and devastating storms ravage Gatlin as Ethan and Lena struggle to understand the impact of Lena's Claiming. Even Lena's family of powerful Supernaturals is affected -- and their abilities begin to dangerously misfire. As time passes, one question becomes clear: What -- or who -- will need to be sacrificed to save Gatlin?

For Ethan, the chaos is a frightening but welcome distraction. He's being haunted in his dreams again, but this time it's not Lena -- and the mysterious figure is following him out of his dreams and into his everyday life. Worse, Ethan is gradually losing pieces of himself -- forgetting names, phone numbers, even memories. He doesn't know why, and he's afraid to ask.

Sometimes there's no going back. And this time there won't be a happy ending.

This is the third book in the Beautiful Creatures saga. I loved it!

I downloaded this book in audio format, as I wanted to read it, but didn't have time to. Having this book in audio format allowed me to listen to it whilst doing household chores, or before bedtime.
The story is again narrated by Kevin T. Collins, who does another fantastic job in bringing the characters alive. He gives each character their own personality and voice.

Ethan Wate is an extremely interesting character. I liked him very much. He is a sweet, loving young man, who happens to be a human in love with a Caster.

Lena Duchannes is a character I didn't really like in the first book. She had a "woe is me" attitude that really grated on my nerves. However, as this series has progressed, she has grown on me. Maybe it has something to do with her attitude change now she has claimed herself.

This story continues from the end of the second book. I liked the fact that this story was again told from Ethan's point of view. I was hooked from the first few minutes of the chapter.

Lena has claimed herself, but in the process "the order of things" has been broken. This means that Gatlin is suffering through a heat wave and an infestation of lubbers (a type of grasshopper similar to a locust). However, this is the least of Ethan's problems. He is still hearing music and finds out that it's a shadowing song (a message from his mother in the Other World). Meanwhile, Link has a problem of his own. After the fight with Abraham Ravenwood and then being bitten by John Breed, Link finds out that he is now an Incubus (he is now calling himself a Linkubus!). I loved this character's attitude to finding out that he is now supernatural. If I was him I would have freaked out a bit more, but I loved his cheerful acceptance; he is one cool dude! I also loved getting to know the Great Aunts better! Their constant bickering made me laugh, but you could feel the love behind their comments and complaints. There are several twists and turns in this story, which kept me enthralled, but there is one HUGE twist that I did, unfortunately, see coming near the end of the book. However, this twist is still shocking in it's finality and left me in tears. I am now looking forward to reading/listening to Beautiful Redemption as soon as possible, to find out what happens next!

Kami Garcia and Margaret Stohl make a great writing team. Their writing style has improved a lot since the first book, and it is more fast paced. The story also flows better and is much smoother. I would definitely read more of their books in the future.

I highly recommend this book if you love YA or Paranormal Romances. - Lynn Worton