Audio/Book Review of Hell's Gift (Save My Soul Book 2) by K.S. Haigwood 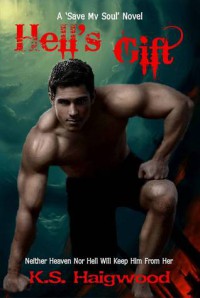 Depression consumes the guardian angel, Rhyan, after his human charge chooses her soulmate over him. Filled with anger and despair, he lashes out. And when his hate-filled words land him neck-deep in Hell, he realizes he's gone too far. He expects trouble, but not to discover his own soulmate in the fiery depths. Abigail is there with good reason, but she's done her time, and in order to save them both, Rhyan must strike a deal with the Devil. The stakes are higher than ever before, with his soul, his friends and even the fate of Heaven and Earth in jeopardy. If he fails, Rhyan stands to lose more than he ever feared. Will true love be denied? It will take everything he's got to break down the traps Lucifer puts in his way. New lines are drawn and old scores are settled, and Rhyan is in for the fight of his life. With Abigail as the prize, and humanity in the balance, he will stop at nothing to claim...Hell's Gift.
*This novel contains explicit content of violence, descriptive sexual scenes and strong language not suitable for anyone under the age of 18*

This is the second book in the Save My Soul Series. I loved it!

I downloaded this book as an audio book, so that I could listen to it while doing household chores. This audio book was narrated by Troy Duran. I loved his narration. He did a fantastic job! His tone was melodic and smooth, and I found myself drawn into the story more easily. I would definitely listen to more books narrated by him.

Rhyan is a guardian angel. Specifically, Kendra Larkin's from the first book. I liked him from the first time I met him. He has a great sense of duty, and is determined to keep her safe. But his bitterness at losing the woman he loves lands him in Hell.

This book was a delight to listen to. I was told that this story was ten times better than the first one, and I would have to concur! I found the world building and storytelling a lot better than the first book. The story is told through several different points of view, which gave me a better understanding of the actions and motivations of the characters involved. The characters also had more depth to them and were more lifelike. I loved this story so much more because of it.

Abigail is a complex character, who is paying for her past sins. She is now one of the princesses of Hell, and is in charge of one of the seven kingdoms - Greed. She is also Rhyan's soulmate. I wasn't sure if I liked her at first, but as the story unfolded, I found myself feeling sorry for her. I didn't pity her though. She did terrible things, but only to survive in a hostile environment.

Lucifer, on the other hand, was a real piece of work. Although he's the king of Hell, he lets his princes and princesses rule over the seven kingdoms on his behalf. If, for any reason, they did not perform their duties to his satisfaction, his wrath was swift and deadly. He made my skin crawl!

The story is full of action, and I found myself holding my breath as Rhyan made a deal with the Devil to get his soulmate out of Hell. His journey through the seven realms was full of challenges and dangerous pitfalls, but it was the final showdown with Murray (Adam's guardian demon from the first book), which had me sitting on the edge of the seat. There are several twists and turns, but there was one shocking moment that completely threw me, as I didn't see it coming. The end of the story, though, left me feeling happy. I am now wondering if the author will be continuing this series with Jocelyn's and Thoros's story. I guess I will just have to wait and see!

K.S. Haigwood has written a wonderful paranormal romance. I loved her fast paced writing style, and the flow of the story was wonderful. I am fast becoming a fan of hers, and am looking forward to reading her other paranormal series she has published as soon as possible.