Book Review of Secrets and Surprises: From a Spark to a Flame (The Chateau series Book 3) by Emma Sharp 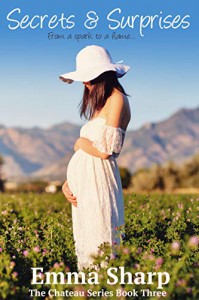 More for Escape to the Chateau lovers

Join Laura and her friends as she continues her exciting and unpredictable roller coaster ride at her beautiful Chateau in the South of France.

With Laura and Xavier’s relationship having more stop, starts than a journey on a London bus, she’s beginning to wonder if the decision to continue with her pregnancy was a good idea.

As if that isn’t enough, Laura has to deal with two conmen who repeatedly turn up to harass her. As well as a spate of natural disasters. Will she find any more treasure, and where will that lead her?

Read on to find out how she deals with a foe from the past. Who she had hoped she’d seen the last of. And how the repercussions of the savage acts from the war years are still affecting the community today. The accumulation of these stressful events eventually takes its toll.

Secrets and Surprises is the third book in The Chateau series written by Emma Sharp. I am not sure if there will be any further books in the series or whether the series remains as a trilogy. I enjoyed it!

Laura Mackley is a character I struggled to like in the first book of the series. However, in this book, I found myself admiring her a lot more and enjoyed watching her grow and flourish as the story progressed. Laura is an ex-nurse from England living in a chateau in France she inherited from her Aunt Mary.

Most of the characters from the first book appear in the consecutive ones. Xavier is a French farmer, working for Laura. He comes across as intense and broody at first, but he seems to soften as this story unfolds. Alice is his elderly mother. Who, after recovering from her stroke, is now helping Laura and her son with the running of the farm. Then there is Gus, Xavier's ten-year-old young son. He helps around the farm when not at school and is a lovely character. Jenny is Laura's best friend from England, who is a nurse and is in a relationship with the mechanic from the French village. There are a few more characters that make an appearance, which gives the story a lovely realistic feel, and a shadowy figure behind the break-in attempts revealed.

The story picks up from the end of the second book. I don't want to spoil it for those who haven't read the first two books. Therefore, all I will say is that Laura finds herself facing many more challenges as she tries to get her new business established, as well as dealing with her conflicting feelings for Xavier. And she is dealing with her pregnancy, among other things. The story told through her eyes. The story also continues about the history of the chateau. And the involvement of the inhabitants of the village during the Second World War. I still found this aspect interesting.

The book ends satisfactorily with no cliffhanger, but the author has left it ambiguous enough that if she wanted to do so, she could continue adding to the series.

Emma Sharp is a debut author who has written an intriguing story. Her writing has improved considerably since the first book. It's not often that the second or third book is better than the debut, but this one shows the growth of the author as well as the characters. It is still not as fast-paced as some books I've read, but it was enough for me to keep turning the pages. The story flows well, which makes it more enjoyable too.

Although there are some scenes of violence, and there is some mention of a sexual nature (which fades and is not explicit), I do not recommend this book to younger readers, as I feel they may struggle with it. I do, however, recommend this book to readers of women's fiction, historical fiction, literary humour and romance. - Lynn Worton