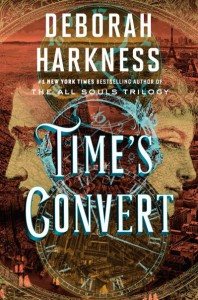 From human to vampire ...

Marcus Whitmore was made a vampire in the eighteenth century. Over two hundred years later, he finds himself in love with Phoebe Taylor, a human who decides to become a vampire herself.

But her transformation will prove as challenging now as it was for Marcus when he first encountered Matthew de Clermont, his sire.

While Phoebe is secreted away, Marcus relives his own journey from the battlefields of the American Revolutionary War, through the treachery of the French Revolution to a bloody finale in New Orleans. His belief in liberty, equality and brotherhood challenged at every stage by the patriarchy of the de Clermonts.

What will he and Phoebe discover in one another when they are finally reunited at Les Revenants, beneath the watchful gaze of Matthew and his wife, Diana Bishop?

This story is the first book in an off-shoot of the All Souls Trilogy. I loved it!

I downloaded this book in both the Kindle and audiobook formats, as this gave me the option to either read or listen to it. Saskia Maarlveld narrates the audiobook. Her voice and pacing are excellent, and I enjoyed listening to her bring the characters to life. I would consider listening to other books read by her in the future.

This story is an addition to the All Souls world created by Deborah Harkness and follows the life, death, and rebirth of Marcus Whitmore on the eve of Phoebe's transformation into a vampire. The book, told through several points of view, mostly Marcus's, Diana's and Phoebe's, takes the reader on a journey of endings and new beginnings.

Several characters from the All Souls world make an appearance; Matthew, Diana, their twins, Phillipe and Rebecca, Isabeau, Marthe, Miriam, Phoebe, and Marcus (to name a few). I also enjoyed meeting Freya, one of Phillipe's daughters. She plays a crucial role in the tale as Phoebe's guide through her transformation from human to vampire.

While Phoebe adjusts to her new life as a vampire in today's world, Marcus takes us back in time to his life during the American Revolution and his transformation at the hands of Matthew into the vampire he is today. I became so absorbed in the tale that it felt like I walked alongside the characters, watching events unfold. Not being an American, I am fascinated by the history of that country and the people in it, as well as the country it is today. The author, being a historian, has brought the past to life for me and I am grateful to her for the peek into a bygone era. Marcus's life is not an easy one and contrasts with Phoebe's upbringing. However, these two characters have love on their side, and I enjoyed watching their relationship develop and deepen as the story unfolded.

I reached the end of the book with mixed emotions; sad that the book ended, but glad at how it ended. I am now looking forward to reading more books from the All Souls universe, as there are more than a few characters I would like to know more about next.

Deborah Harkness has written a fantastic tale in the All Souls universe. She has created a world where humans, witches, daemons and vampires all live in an uneasy alliance. I love her writing style, which is fast-paced and exciting, and the story flowed beautifully!
I am looking forward to reading more of her books in the future.

I highly recommend this book if you love your stories to be full of witches, daemons and vampires, or if you love paranormal romance or urban fantasy genres. - Lynn Worton