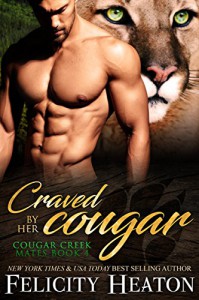 For the last twenty years, Cobalt has burned with a need of one female, a beautiful raven-haired cougar who captured his heart the moment he set eyes on her. His position as pride protector has been a blessing at past mating gatherings, keeping females away, but this time it feels like the worst of curses, because the female who has bewitched him so thoroughly is taking part for the first time and all he can do is watch as males battle for her.

As much as she hates the way her mother controls everything in her life, Ember is thankful for it as she constantly turns away suitors, unaware of the pain she’s sparing Ember from with every male she rejects. Every male who isn’t the gorgeous blond with darkness in his eyes and an easy smile she burns for with an intensity that scares her, awakens feelings in her that have her verging on doing something reckless. Damaged goods he might be, dangerous and unpredictable, but with every contest over her that pulls her closer to her doom, she grows more determined to follow her heart, no matter the consequences.

With every fight over the right to Ember, the tethers on Cobalt’s feelings twist and threaten to snap, a torment he cannot bear and one that has him willing to risk it all, because a single kiss would make even the harshest punishment worth it. He would die for one moment with her… his fated mate.

This story is the fourth (and final) book in a new shifter series called Cougar Creek Mates Shifter Romance Series, which is an offshoot of the Eternal Mates series (which I love) and based in the same world.

Cobalt is a wonderful character. I liked this shifter a lot, even though he's full of angst and tends to mope around. However, he has reason to sulk. He has loved Ember from afar for more than twenty years after he realised she was his destined mate. He didn't expect her to attend the Gathering, but when he sees her there, he’s torn between his instincts and duty. Will he claim his mate?

Ember is also a wonderful character. I like this feisty female shifter. She has known that Cobalt is her fated mate for many years and she only agreed to go to the Gathering to claim him. Unfortunately, she realised her mistake too late - he couldn't join in the Gathering due to his duty to the pride as a protector. Now she faces a dark future if her mother chooses her mate for her from the males vying for her attention. But can she win the man who holds her heart?

I began reading this story, told through both Cobalt's and Ember's points of view and quickly became hooked. The action is intense from the start. Cobalt's angst has been hinted at through the previous books in the series, so finally getting to read his and Ember's story is a relief in a way. This story goes to the opposite ends of insta-love. These two characters have loved each other for several decades, but due to Ember's immaturity and not reaching 'adulthood' for that period, it has been a slow-burning fuse. Now Ember has reached mating age, the fuse ignites and becomes a conflagration. The story takes the reader through a roller coaster ride of emotions.

The reader also gets to meet the other characters from the previous books: Rath and Ivy, and Flint and Yasmin. Storm and Gabi are on honeymoon, so don't make an appearance. Nevertheless, they have a presence in the book too.

There is another fantastic fight scene or two that gripped me from beginning to end. Of course, I knew who would win; there was no doubt. This author has a fantastic way of describing fight scenes that come alive. I am feeling a little sad that this side series has come to an end, but I am hopeful that we will meet these characters again in the Eternal Mates universe in the not too distant future. There is the connection to Archangel to investigate after all.

I reached the end of the book with mixed feelings. I love the shifter world the author has created but feel let down by the rushed feel to the series. I don't know if the author is putting on too much pressure onto herself to get these books out quickly, or not. I prefer quality over quantity, and this book is decidedly below her best work, even though I still loved it. I am now looking forward to reading the next book in the Eternal Mates series to see what happens next.