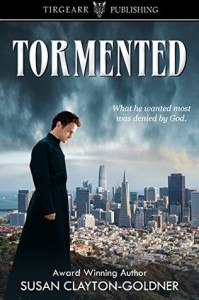 Father's Anthony's devotion to God and His Church begins to unravel the moment Rita Wittier steps inside St. Catherine’s Cathedral in San Francisco. He struggles to control his feelings, but two years later, he is a man obsessed.

In an attempt to rediscover the priest he intended to become, Anthony flies back to Delaware to visit Father Timothy. If redemption can be found anywhere, surely it can be found in the church of his childhood and in the soothing Irish brogue of his former mentor.

The months pass, 60 Minutes does a special on Father Anthony and the Shepherd Academy—a school he started for disadvantaged children. He’s become a national hero— nicknamed the Good Shepherd. But he can’t get Rita out of his mind. He wants her more than anything—even God—and can no longer deny it. Six hours after he tells her how he feels, Rita is found dead in her car from an apparent suicide. Or is it murder?

This is an interesting psychological thriller/murder mystery. I really enjoyed it!

Father Anthony is an interesting character. I liked him and felt for him as he finds himself questioning his life as a priest when he begins to have feelings for one of his parishioners, Rita Wittier. When she is found dead in an apparent suicide not long after he confesses to her about his feelings, he finds himself torn between grief and determination to find her killer.

I started to read this book and was quickly hooked. Set in 1971, the story takes the reader on an emotional journey of a priest who suffers from a crisis of faith. This story is told through various characters' view points, which made it more interesting so that a reader gets to see what's happening at different points throughout the tale. Tormented is an apt title, as each character is beset by doubts and emotional angst. Besides Father Anthony, the reader is also introduced to Rita's husband, Konrad, who's a criminal lawyer, her nine year-old daughter, Connie, and her brother, Gordon (or Gordy as he's known by) who is a fashion designer/artist. We also are introduced to the investigating policeman, Detective Paul Harley Stanwick.

There are several twists and turns in this story that had me doubting myself, as well as a few well placed red herrings that kept me from guessing who the main suspect was initially. I should have listened to my gut. Even though I had an inkling as to who it was who killed Rita, at least by the half-way point, I was still surprised by how the author gave the reveal a twist. The character I felt for the most was Connie. Being only nine, she has to deal with a lot of emotional baggage, which strips her of her childhood innocence. The tale is a riveting read of danger and suspense. I reached the end of the book with mixed feelings - sorry for the characters but glad that the culprit was caught. I really enjoyed the story though.

Susan Clayton-Goldner is a new author to me, as I've never read any of her other books before. I love her writing style, which is not particularly fast-paced even though it kept me turning the pages. The story flowed wonderfully from scene to scene, which made it easy to picture in my minds eye. I would consider reading more of her books in the future,

Please note: I received a complimentary copy of this book from the author before the publication in May 2018 with no expectation of a positive review.