Audio/Book Review of The Dragons of Dorcastle (The Pillars of Reality, Book 1) By Jack Campbell 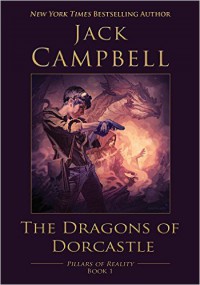 For centuries, the two Great Guilds have controlled the world of Dematr. The Mechanics and the Mages have been bitter rivals, agreeing only on the need to keep the world they rule from changing. But now a Storm approaches, one that could sweep away everything that humans have built. Only one person has any chance of uniting enough of the world behind her to stop the Storm, but the Great Guilds and many others will stop at nothing to defeat her.

Mari is a brilliant young Mechanic, just out of the Guild Halls, where she has spent most of her life learning how to run the steam locomotives and other devices of her Guild. Alain is the youngest Mage ever to learn how to change the world he sees with the power of his mind. Each has been taught that the works of the other's Guild are frauds. But when their caravan is destroyed, they begin to discover how much has been kept from them.

As they survive danger after danger, Alain discovers what Mari doesn’t know – that she was long ago prophesized as the only one who can save their world. When Mari reawakens emotions he had been taught to deny, Alain realizes he must sacrifice everything to save her. Mari, fighting her own feelings, discovers that only together can she and Alain hope to stay alive and overcome the Dragons of Dorcastle.

This is the first book in a fantastic epic fantasy series called The Pillars of Reality. I absolutely loved it!

Mari is a fantastic character. I love her determination to do the right thing, even at the cost of her own life. She is an eighteen year-old mechanic... Sorry, Lady Master Mechanic as she loves to correct all her Guild elders who insist on dropping the honorific, even though she has attained it by qualifying as the youngest Lady Master Mechanic since the Guild was first formed. When the caravan/convoy she is travelling in is attacked, she finds herself travelling with a mage who was hired by the caravan to protect it as it travelled to Ringmon where she has a Guild contract to repair a mechanical device. As danger threatens, Mari finds herself torn between doing what is right, and her growing feelings for Mage Alain.

Mage Alain is also a fantastic character. I liked him a lot. He is seventeen years-old and one of the youngest Acolytes to achieve Mage status. He has been taught from a young age not to show or feel any emotions and that the world he lives in is an illusion, where nothing is real. When the caravan he's been contracted to protect comes under attack, he finds himself drawn to Mari, feelings long forbidden returning to the surface. As he begins to see through the illusion to the truth that had been kept from them, he realises that Mari is the woman prophesized to unite the people of Dematr. Can he protect her long enough to fulfil it?

I purchased this book in audio format in 2015 when it was recommended to me on Audible due to my listening and browsing history. I am kicking myself for not listening to it sooner. I kept putting it off for some reason unknown to me. Maybe I just wasn't in the mood for it at the time. Who knows? Anyway, now I'm seriously annoyed with myself for missing out on listening to this story, which is narrated by MacLeod Andrews. He does a fantastic job in bringing the story to life. Even Alain, who's voice is meant to be flat and emotionless comes across with subtle hints. You would think that Alain's voice would be monotonous, but it's not so. I love the way he brings all the characters to life with different accents, inflections and tones. He even makes the women's voices sound perfect for each character. As for his narration, he read the story clearly and concisely, and his pacing was perfect. I would definitely listen to more books read by this narrator.

This story introduces us to the world of Dematr. It is a mass of contradictions. There are two great Guilds who hold all the power over the common folk - The Mechanics and The Mages. These Guilds have held power for centuries and refuse to relinquish their hold and reject change of any kind. However, this is slowly strangling the world, making it harder and harder for the Mechanics especially as their technology is regressing. This story has a steampunk feel to it, with machinery being steam driven at times - trains for instance. Though there are some more modern items such as far-talkers (walkie-talkies to you and me), torches using batteries, and rifles and pistols that are decidedly more modern-day. Mages use energy from the land around them and some of their own energy to make spells. These spells can be used in various ways - from hiding oneself to creating a dragon.

This book is told through the eyes of both Mari and Alain and I found myself completely hooked from beginning to end. I was fascinated by how different the Guilds were, but also struck by how similar they were too. I loved getting to know the two main protagonists and watching (in my minds eye) the story unfold as I listened. I have no idea why, but as I listened to Mage Alain talking and thinking, I had a sudden picture of Richard Dean Anderson as he played Colonel Jack O'Neill in SG1 - with a dry wit and deadpan face. If they ever decide to make this book into a movie or TV series, I would hope they could find someone like that to do Alain justice. Anyway, back to the book. I found myself an emotional wreck near the end. I think my heart broke, it definitely felt heavy at any rate. However, the audiobook version (I can't speak for the book version) has a preview of the second book in the series and I am now looking forward to reading/listening to The Hidden Masters of Marandur as soon as I can.

Jack Campbell is a new author to me. I've never read or listened to any of his other books. However, I may have to add him to my favourite authors list, as he's found a fan in me. I love his writing style, which is fast paced and descriptive, and the flow of the story is good too.

Although there is no mention of any scenes of a sexual nature, I do not recommend this book to younger readers under the age of 15 due to some violence. I do, however, highly recommend this book if you love dark or epic fantasy, steampunk or action/adventure and supernatural/paranormal romance genres. - Lynn Worton