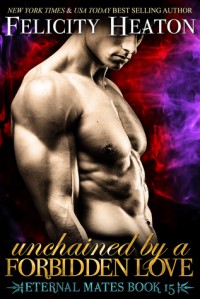 Lost to the darkness, Fuery wages a daily war against the corruption that lives within him, constantly in danger of slipping into the black abyss and becoming the monster all elves fear. Work as an assassin gives him purpose, but what reason is there to go on when he killed the light of his life—his fated mate?

Shaia has spent forty-two centuries mourning her mate. Tired and worn down, she agrees to wed a male of her family’s choosing, following tradition that has always bound her as a female and hoping she will be able to gain just a little freedom in return. But as she resigns herself to being the mate of a male she could never love, fate places an old friend in her path—one who tells her that her lost love is alive.

Will Shaia find the courage to break with tradition and leave the elf kingdom in search of her mate? And as a ray of light pierces his soul again, can Fuery find the strength to win his battle against the darkness or will it devour him and that light of their forbidden love forever?

This is the fifteenth book in the Eternal Mates series. I loved it!

Fuery is a fantastic character. He was introduced to the reader a lot earlier in the series, but hasn't had a chance until now to tell his story. He is an Elf and is working as an assassin alongside Harbin, who's story was told in book eight - Marked by an Assassin, and Hartt, who's story is yet to be told. Unfortunately, due to first fighting in a long war between the Elf Prince brothers, Loren and Vail, and his career as an assassin, he has become tainted by a darkness that threatens to overwhelm him and turn him into a monster with no conscience or mercy. When he learns that his fated mate whom he thought he had killed in a fit of madness is still alive, Fuery must battle the darkness within to claim her once more before its too late.

Shaia is also a fantastic character. I loved meeting her. She is a feisty elf, but she also has a nasty habit of allowing her family to dictate her life for her. I'm not sure if this is because she is looking for their approval or just has a low self-esteem problem. Nevertheless, she met and fell in love with Fuery forty-two centuries ago, but thought he died in a battle between the two princes not long after they became mates. Now, as her family is forcing her into a relationship she doesn't want, she is given a glimmer of hope when she finds out that Fuery wasn't killed at all. Determined, Shaia embarks on a dangerous mission to win her mates heart once more.

I absolutely love the Eternal Mates world. I started to read this book and I was quickly pulled in. It kept me riveted from beginning to end.

The story is told through the eyes of both Shaia and Fuery, which gives the reader a chance to see their thoughts and feelings. The characters living within the Eternal Mates universe have a strength within them that helps them to survive. However, they also have flaws and fears, which makes them lifelike and relatable. The heat between the main characters blazes white hot on the pages, and left me breathless at times with their intensity.

I did wonder if this series is becoming too formulaic for me. Don't get me wrong, I do love a good romance (paranormal or otherwise), but if this is a series with a story arc hidden amongst the pages (Archangel anyone?), this book didn't have anything to add to it. Sometimes its good to take a step out of the story arc and then bring the characters in at a later date back into the story arc. I am not sure if this is what the author is doing, but I am also a reader who would like more progression on the story arc front. The series is on book fifteen and each story in the series is a stand-alone, but since there seems to be a vague story arc, there must be a conclusion. However, it seems to me that the author is drawing it out a bit too long. I can understand why she is doing this; I too love the Eternal Mates world and don't wish it to end either, but when the story arc is dragged out in this fashion I start to loose interest in a series. This doesn't mean I won't read any more of the series, only that, in my opinion, the series is becoming a little tired. Perhaps the author should focus on one of the other book series she is working on, Guardians of Hades for instance, or something else for a bit before coming back to this series again. I would much rather have quality over quantity when it comes to a book series, especially one I love.

Felicity Heaton has written another fast paced, sexy paranormal romance that I thoroughly enjoyed! I love her fast paced writing style, which flows effortlessly from scene to scene. She is on top of my favourite author's list.

I do not recommend this book to younger readers due to the extremely HOT and explicit sexual scenes. However, I highly recommend this book (and series) if you love sexy paranormal romances full of vampires, elves, werewolves, cat shifters, succubi, incubi, angels, dragons, demons and demonesses. - Lynn Worton