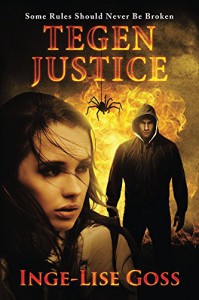 After embracing her new Tegen existence, Sara Jones is determined to destroy her ex-lover’s organized crime empire, one link at a time. Along with her newly acquired skills of spider-climbing agility, self-healing powers, and the ability to eject poisonous needles came the haunting need to consume blood and flesh tainted by Tegen deadly spiders.

Armed with her skills and using the alias Sally Jablon, Sara has tracked some nefarious associates of her ex-lover to Baton Rouge. But before she can fully execute her plan to wipe out that criminal element, she is faced with her former lover, an out of control Tegen, and the repercussions of disobeying Tegen rules. Death and mayhem ensue as Sara tries to outrun and outsmart an enemy she knows all too well.

This is the second book in the Tegens series. I really enjoyed it!

Sara Jones is a wonderful character. When I first met her in The Tegen Cave I wanted to shake some sense into her. I felt she has grown and adjusted well into her new life as a Tegen. Now using the name of Sally Joblon, she is still determined to break up an organised crime/drug family. However, finds herself being pulled in two directions emotionally. Which will win, her head or heart?

I started this story and was hooked from the first page. It is told through the eyes of Sara/Sally and the reader is taken on a roller coaster ride of action, adventure. mystery and danger. I love the way the story unfolded. There are some interesting characters introduced. Wendy is a young Tegen, who comes across as a spoilt brat; if she doesn't get her way she throws deadly tantrums. I must admit that I didn't warm to this character. She tested not only Sara's patience, but mine too. I liked Agnes, Sara's hired Grandma, she is a kind lady. There is also another intriguing character introduced. His name is Kendall. He is a Tegen enforcer and is quite mysterious. He sent shivers down my spine. The heat between Connor and Sara is still explosive, though there is not much intimacy in this book compared to the first one.

One thing I will say about this book is that the story is wonderfully written. The characters are lifelike and the storyline gripping. I reached the end of the book, which ends with a slight cliffhanger, with mixed feelings. Now I can't wait to find out what is in store for Sara in the next book.

Inge-Lise Goss has written an intriguing horror full of mystery and suspense. I love her writing style, which is fast paced, and the flow was wonderful. I am curious to see what this author comes up with in the future.