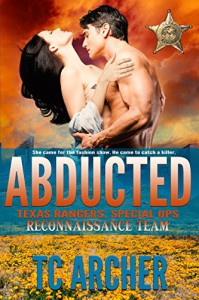 She came for the fashion show. He came to catch a killer.

The El Paso fashion gala was slated to be the hottest event of the year and a must do if Liz Monahan, the creative brains behind Nina Bruno Designs, was to vault the company to the big time. Circumstances put Liz at the party in one of her own creations, escorted by a young, handsome model hired to show her off to the well-known and well-established. But Liz didn't count on her date being an undercover Texas Ranger who is investigating a human trafficking ring. She also didn't count on being kidnapped and trafficked herself.

When Texas Ranger Ben Hunter slips away from Liz Monahan at the gala and begins his investigation, he couldn't be more surprised to arrive in Juarez, Mexico to find her held captive by infamous human trafficker Carlos Sanchez. In order to save her, Ben must commit murder. Hers.

This is the first book in a new romance series called Texas Rangers: Specials Ops. I loved it!

Elizabeth (Liz) Monahan is a likable character. Though, I wanted to either slap her or shake her on occasion. She is the creative director at Nina Bruno Designs, an up and coming fashion house in Texas. When she steps in at the last minute to showcase the house's latest fashion design, she has no idea what hornets nest she will be stepping into.

Ben Hunter is also a likable character. I must admit that I liked him better than Liz - he didn't annoy me in the least! Undercover as Liz's date, Ben is determined to break open the human trafficking ring that has been smuggling women and girls over the border from Mexico. However, he didn't count on his attraction to Liz.

I had previously read a paranormal horror and a science fiction book by this author, so when I heard that this book was available to pre-order, I bought myself a copy.

I love reading romances such as this one; they are fun, quick reads. I started to read this book and didn't put it down until I had finished it. This story took me on an adventure full of danger and romance. There are several twists and turns in the tale that had me sitting on the edge of my seat. The villain, Carlos Sanchez, is a dangerous man, with powerful men in his employ. However, I would have preferred if he was more "hands on", rather than letting his henchmen carry out orders. But, just as in real life, this character hides behind them to avoid capture by the law. Nevertheless, his presence is felt through the story and sent shivers down my spine. He is not a nice man by any means.

Unfortunately, although I love this story, I did find this book a little formulaic, with a similar premise to other books I have read over the years (and I've read hundreds). Granted, it's not easy to come up with fresh material when writing romances - it's all been written before. However, the vivid descriptions used to describe the characters and scenes brought the book to life. The danger felt palpable and real - this got my heart racing. Speaking of pulse pounding, the heat generated by Liz and Ben's attraction scorched the page. I reached the end of the book with sadness, as I wanted to keep reading. However, I am now looking forward to reading the next book in the series.

T.C. Archer has written a wonderful contemporary romance. I love their writing style, which is fast paced and exciting. I also love the way the story flowed. I have added these two authors onto my favourite author's list and will be reading more of their books in the future.

Due to scenes of a sensual nature that are a little on the explicit side (though not as explicit as some books I have read), as well as some bad language, I do not recommend this book to younger readers under 16. However, I highly recommend this book if you love steamy contemporary romances. - Lynn Worton