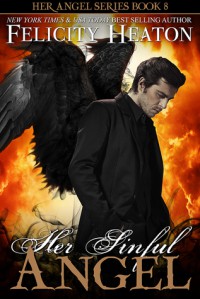 Cast out of Heaven and now the king of Hell, Lucifer is a powerful fallen angel warrior with a heart as cold as ice and soul as black as the bottomless pit. For millennia, he has ruled his realm with an iron fist as he plots the demise of his ancient enemies. When one of those enemies dumps an unconscious mortal female in the courtyard of his fortress and leaves her there, Lucifer finds himself entranced by the beguiling beauty and tempted beyond all reason. But is the enchanting Nina an innocent pawn in the eternal game or part of a plot against him?

This is the eighth book in Her Angel romance series. I loved it!

I will start off by saying that I absolutely LOVE the cover! I love the bare chested angels on all the other book covers in the series, don't get me wrong, but there's something about a suit wearing one that makes you want to know what's underneath, if you know what I mean? *wiggles eyebrows and winks*

Lucifer is the ultimate bad boy. He is ruthless, cruel, dangerous and oh so sexy! Being THE first fallen angel, he intrigued me when he was introduced in Her Demonic Angel. By the time Her Avenging Angel was released, I wanted to know him a little better. When I heard that his story was being planned, I was ecstatic! He is not flawless. He has made mistakes, chosen the wrong path on more than one occasion and been made to pay for his sins. Now the king of Hell, he plots his revenge on Heaven. When a mortal woman is left at his door, he is wary of the feelings she stirs in him.

Nina is a wonderful character. I really liked her. She is smart, sassy and headstrong. She has not had an easy life and has been hurt by an ex, but her life is about to get extremely complicated. Kidnapped and abandoned at a stranger's door, she finds herself drawn to the mysterious Lucifer.

I have been eagerly awaiting this story and it didn't disappoint! I started to read and didn't put it down until I finished it. I love how the story arc has developed throughout the last few books in the series and can't wait to read the new series which continues it. I also love how the characters have grown. Lucifer was one of the angels of Heaven before his fall. He may have fallen off the rails and gone dark, so to speak, but he still has a little light hidden within. Finding Erin, his daughter, and she having his grandson, Dante, has dusted the dirt off of it, but Nina sees beyond the grime to the lonely, noble and bright light within. This story is full of emotional ups and downs, as well as several twists and turns. The scenes and characters are well described and I felt like I was in the midst of the action. I found myself giggling at one of the scenes when Lucifer "borrows" Erin's body to rescue Nina. And I loved the one scene where Liora helps Lucifer after his fight with Mihail. Asmodeus's amused reaction to his master's predicament made me smirk. After reading Lucifer's story, I am becoming rather anti-Heaven myself. If I was an angel, I think I too would have fallen. I mean no offence to any religion when I say this. This is a piece of fiction and I find myself empathizing with the characters, that's all.

I don't normally put quotes in my reviews, but I love this line that Lucifer says to Nina: "I was heartless from the moment I met you. You stole it from me."
I read that line and my heart melted! Lucifer is my new book boyfriend!

Her Sinful Angel is, I think, the final book in the Her Angel series, although Her Avenging Angel (Book 7) was meant to be. However, I still have a few questions that remain unanswered, such as: 1) What is Heaven up to? 2) Why place Nina on Lucifer's doorstep? 3) What has this all got to do with the four fallen princes who have escaped Hell? I can't wait to find out if any of these questions get answered in the new series.

Felicity Heaton is number one on my Favourite Authors List. I love her fast paced writing style - it is extremely fluid and flows beautifully! I am in awe of her talent to weave stories with characters that come alive on the page. I felt like I could bump into them whilst doing my shopping!