Book Review of Knot of the Slain (Blood Angels Book 1) by T.C. Archer 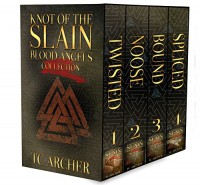 For Gerald Forstner, veteran detective, son of a cop, cult hunter, and divorced dad, the face of Miami changes when he must solve a series of murders eerily reminiscent of his first case as head of Miami’s Serial Killer Task Force.

When Gerry is inexplicably healed of a mortal stab wound by a beautiful blonde murder suspect, he questions his sanity and wisdom in remaining on the force. Discovery of Icelandic artifacts that document immortal priests and female assassins breaks the case wide open. The case, however, becomes personal when each murderer becomes the next victim in a chain that links directly to his son.

I am not a huge fan of horror, but having read another book by this author (Chain Reaction: Phenom League), I couldn't wait to read this book. This is an intriguing horror. I loved it!

Gerald (Gerry) Forstner is a fascinating character. I did like him, but felt his character was not as fleshed out as he could have been. He is a police detective, leading a task force charged with catching serial killers. He and his K-9 partner, Hargrave are thrown into a cat and mouse game that has roots in an old Norse religion. As the body count rises and old religious practices come to life, will he be able to figure out what the killer's next move will be in time? Can he catch the killer before more victims are found?

This book is split into four sections. Each section was released separately, similar to a serial. I bought this as the whole collection and I am glad I did, because it would have driven me crazy to finish one section without having the next one to start straight away!

This book caught and held my attention from the first page. It is not easy to describe this book without giving any spoilers, but I was quickly pulled into the story and found myself intrigued by the way it unfolded. There seems to have been a lot of research done on Norse mythology, but the author has added a supernatural twist to it, which made me sit back and think, "This may be entirely possible!". I loved this aspect of the story. However, I did think that some of the characters could have been a little more fleshed out. I was intrigued with Freyja/Sula. I would have loved to know a little more about this woman warrior. She had a rather brutal experience to become what she was, but I would have liked to know more about her before she became a Valkyrie. Though she only appears a few times throughout the story, the impact she had on me, as well as Gerry, was profound.
Gerry's ex-wife Brenda, however, really ticked me off. I would imagine that it's hard being married to a cop, but it bugged me that she would be so bitchy/spiteful to Gerry with regards to their son. I know that good marriages can sour, but using a child to emotionally blackmail an ex is disgusting in my opinion and hurts not only the affected ex spouse but the child too.

This book took me on an emotional roller coaster ride from beginning to end. There are several scenes of violence and, in some cases, gore. The mystery surrounding the killer and the connection to an Icelandic cult over one thousand years before kept me riveted. There are several twists and turns that I didn't see coming and a few red herrings scattered through the story that had me constantly guessing. Some of the violence is a little shocking and could disturb some readers. I did find that because this book is in four sections, some of the continuity and pace was affected. However, I think that could be easily fixed by having it re-edited as one book and give it a bit of a polish to smooth the rough edges. I reached the end of the book and felt a little sad, because I wanted to keep reading! I hope that the author is working on book two, because I would love to read it as soon as possible!

T.C. Archer has written an intriguing story that is part horror and part crime thriller. I love this author's (or should I say authors' as there are two of them writing as one?) fast paced writing style and, although the flow and continuity was a little off at times, I enjoyed that too. I look forward to reading more of their books in the future.

Due to the violence and the mention of sexual abuse (alluded to and not explicitly shown), I do not recommend this book to younger readers or those of a sensitive nature. I do, however, highly recommend this book if you love horror or crime thriller genres with a supernatural or paranormal twist. - Lynn Worton