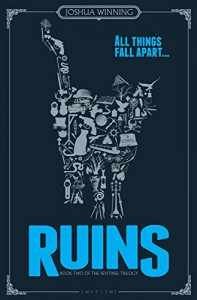 Second instalment of the critically-acclaimed Sentinel Trilogy. In his desperate search for answers about the Sentinels, an ancient society of guardians that his parents once belonged to, fifteen-year-old Nicholas Hallow is tipped into a fresh nightmare of terrifying monsters - and even more sinister humans. AsNicholas is challenged to become a Sentinel, he must track down a mysterious girl with the help of a grumpy cat. Meanwhile, an uprising of evil threatens to destroy the Sentinels and send the world spiralling into chaos.

This is the second book in the Sentinel Trilogy. I absolutely loved it!

Nicholas Hallow is a fantastic character. I liked him very much when I first met him in Sentinel. He has dealt with tragedy and faced danger which has destroyed his world with more bravery than even I would have in the same situation. Now he finds himself on a quest to locate a girl with extraordinary powers to help him fulfil a prophecy.

I have been eagerly awaiting the release of this book ever since I finished Sentinel in 2013. It was well worth the wait! I started to read this story and didn't put it down until I had finished it a few hours later. I was hooked from the first page and found myself sitting on the edge of my seat often. This story is told through several different points of view, which gives the reader a broader understanding of what is happening when Nicholas is elsewhere.

The characters come alive as the tale unfolds. I loved meeting Samuel Wilkins again. He was Nicholas's parents friend. I liked his spirit! At 71 years old, he's still got a lot of it, though his health is not as good as it once was. Isabel is a unique character, and her snarky and sarcastic comments had me giggling! I liked her very much, to say that she's now a cat. It's amazing what havoc a misfired spell can do to your perspective! Malika is her usual evil self but, now that Diltraa is dead, she has her own plans to follow and will stop at nothing to see them through.
There are also two new characters introduced in this book. They are Dawn Morgan and Rae Walker. These two girls bring different perspectives to the story. I liked Dawn, who is rather shy and emotionally damaged after an event that changed her life. But, as she interacts with Nicholas, she comes out of her shell more. Rae is more enigmatic. She has not had an easy life either, but she has had more problems in her fifteen years than most will have in their entire lifetime! She also happens to have a deadly power that she is struggling to control.

There are several twists and turns in this book that I didn't see coming, but they just added to a totally enthralling read! I found myself on an emotional roller coaster ride from beginning to end. By the end of the book, I still had some questions that needed to be answered (although a few that were left over from the first book were) but I am now looking forward to reading the next book in the trilogy as soon as I can!

Joshua Winning has written a fantastic sequel to his debut novel! I love his fast paced writing style, and the story flowed beautifully. This author is one to watch. He is one of only a handful of male authors who I have added to my favourite authors list and I can't wait to see what he will come up with in the future.

As this book is a Young Adult fantasy, I highly recommend this book (and series) to young readers aged 12+ and to adults who love YA stories filled with witches, demons, supernatural beings, danger and adventure! - Lynn Worton