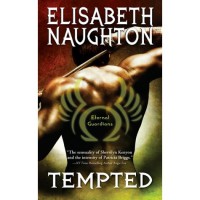 Demetrius - He's the hulking, brooding warrior even his fellow Guardians avoid. Too dark. Too damaged. And given his heritage, he knows it's best to keep everyone at arm's length. Isadora is missing. The words pound through his head like a frantic drumbeat. For her own protection, Demetrius did all hecould to avoid the fragile princess, his soul mate. And now she's gone -kidnapped. To get her back, he'll have to go to the black place in his soul he's always shunned. As daemons ravage the human realm and his loyalty to the Guardians is put to the ultimate test, Demetrius realizes that Isadora is stronger than anyone thought.
And finally letting her into his heart may be the only way to save them both.

This is the third book in the Eternal Guardians series. I loved it!

My sister recommended this series to me as she had read them all (that have been released so far) and thought I would enjoy it, and she was right! I downloaded this as an audiobook, as I had previously enjoyed listening to the first two books in the series in audiobook too. Tempted is again narrated by Elizabeth Wiley. She does another fantastic job in telling the story. Her narration is crystal clear and her interpretation of the characters brought them to life.

Demetrius is a rather intriguing character. I didn't know much about him, even from the glimpses I had of him from the first two books. I am extremely glad to be able to get to know him a little better. He is a very dark and mysterious person, who keeps to himself and even holds his fellow Guardians' at arms length. He has a secret or two that he would prefer to remain hidden but, when Isadora goes missing, he realises that he will have to embrace the darkness within to be able to save her.

Isadora is a character that surprised me when I first met her in Marked (the first book in the series). I was originally intrigued with Isadora, who, although a princess, seemed to have a very weak character and let herself get pushed around, especially by her father King Leonidas. However, as this series has progressed, she has impressed me with her inner strength and steely determination. Now, she has my respect and admiration.

This series seems to be getting better and better as it goes along; I am completely hooked! The story continues from the end of the second book and see's Isadora being kidnapped by a witch, who has been given the task by Apophis, a warlock determined to gain power using Isadora's powers of the Hora to thwart Atalanta. What follows is a fast paced, action packed story that had me sitting on the edge of my seat! The story is told through various points of view, which I really liked. Not only do we meet all of the Guardians, as well as Callia and Acacia (Casey) - Isadora's half-sisters' - again, Max is still very much in the story, though in a more minor role. We also get to meet Orphius more. He's Isadora's friend and, even though he is part daemon (though none of the Guardians know this), he has a playful sense of humour that I like. Demetrius's secrets, once revealed, made me understand him a little more. I can see why he would keep himself apart from the other Guardians' though, but this made me feel sad for him. He hasn't had an easy childhood and, finding out who his mother is, made me realise why he would do this. Meanwhile, Atalanta is plotting and scheming as always, and is determined to find the Orb of Chronos that Max had stolen from her. She is one of those villainous characters you love to hate; she's perfectly evil!

One thing I will say about this story (and series as a whole) is the world building is excellent. The characters are well developed and extremely lifelike. The story arc is beginning to take shape and I am getting excited to see where it leads! The story ends on cliffhanger, which has me looking forward to continuing with this series and I will (hopefully) get to read/listen to Enraptured as soon as I can.