Book Review of Eban (The Heckmasters #2) by Allison Merritt 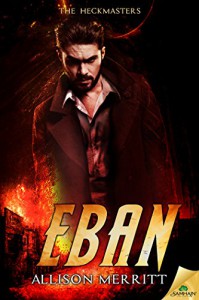 If love can’t save them, there will be hell to pay.

Grateful for his mother’s human blood that cools the dark fire of his demon father, Eban Heckmaster has set up a medical practice in New Mexico territory. But there’s no hope of living a normal life until he rids himself of a seductive demon that’s been pursuing him.

Vanquishing it won’t be as simple as sharpening his demon-hunting sword. The clever creature is hiding inside his best friend’s head, and she has no idea of the havoc she’s been wreaking, especially with his body.

Beryl suspects Eban knows why she’s been waking up with no memory of where she’s been or what she’s done, but he’s not talking. But when she inevitably learns what he’s hiding—or rather, what’s hiding inside her—she wonders if her love for him is real, or an illusion created by the demon’s lust.

Eban is losing the battle to hold his rising desire in check. There may be only one way to extricate Beryl from the beast entangling her mind. Call upon his demon blood…and offer it as a sacrifice.

Warning: Contains a half-human, half-demon doctor who can heal anyone except himself, and a woman who’d blush if she could remember the sensuous torture she’s been inflicting on him. Could make you wonder if you should start listening to the voices in your head…

This is the second book in The Heckmaster's series. I absolutely loved it!

Eban Heckmaster is a fantastic character. I liked him from the first time I met him in Wystan, the first book in the series. He is the middle sibling of the three Heckmasters' and is the doctor of the family. He has always wanted to get away from Berner, the demon riddled town that he and his two half-demon brothers protect from "The Pit", a portal to and from Hell. But after meeting Beryl Brookshier, who arrived with Rhia and Sylvie Duke, he knows that the war with evil is far from over.

Beryl Brookshier is a character that I liked, but didn't really know much about when I first met her in the first book of the series. She has been extremely ill and under the care of Eban. But, she has no idea that she has a demon imp, who also happens to be a lust demon, attached to her brain like a parasite. Can she overcome it's hold, or will she be doomed to die?

This is a fantastic supernatural/paranormal romance! Set in the late 1800's, this book quickly swept me up and carried me away. The story is told through various points of view, which made it very interesting. There is excitement, danger, mystery and suspense mixed in with the hot romance. The three Heckmasters make a formidable team as they tackle the evil escaping from hell.

This story continues on from the end of Wystan, but follows Eban and Beryl as they struggle to come to terms with events after the battle with Noem, though Wystan and Rhia are now married and on their honeymoon. I also loved meeting Wystan and Tell again, as well as Rhia and Sylvie. I also found it interesting to see things through the eyes of the lust demon, Rosmar. She brings a sense of fun mixed with deadly poison to the tale. I did like her because, although she is a demon, she is trying to atone for her sins by working with the Grey Side (demons who oppose total dominion of Earth by Astaroth - the deadly demon trapped in The Pit by the Heckmasters' father). But, she also has her own agenda and is hoping to tempt Eban into unleashing his demon side to help her. But Eban is not a pushover, though he does do something rather dangerous and sets off a chain of events that could mean the end of Berner, if not Earth. This introduces us to another character, who happens to be an angel called Eliakim. What his role is or will be remains a bit of a mystery, but I really liked this enigmatic angel. He brings the might of Heaven with him, and is definitely a warrior to avoid if you're a demon.

The story is full of twists and turns, with one that I didn't see coming and I felt sorry for the Heckmaster brothers as they had to make a difficult decision regarding a loved one. I did find some of the story, especially where Eban threatened to speak Tell's real name, to be a little humorous. Okay, having a curse on your spoken name is not meant to be funny, but the way Eban taunted his brother with it reminded me of how, when my sisters and I were younger, we would call each other names just to get a rise out of them. Siblings can be cruel and I felt sorry for Tell. However, it made me curious to find out what his real name is!

The end of the story doesn't finish on a cliffhanger, but it made me feel sad because I wanted to keep reading about Berner and her inhabitants. This series has taken me on an unexpected journey, but I am loving the roller coaster ride. I guess I shall just have to wait impatiently for Tell's story now.

Allison Merritt has written a wonderful paranormal/supernatural romance. Her characters come alive on the page and her descriptions of the scenes made me see them in my mind's eye with ease. I love her writing style, which is fast paced and exciting. I also love the flow of the story; the scenes flowed seamlessly from one to another. I think this author has found another fan! I would love to read more of her books in the future.