Book Review of Adapted for Film by Stacey Rourke 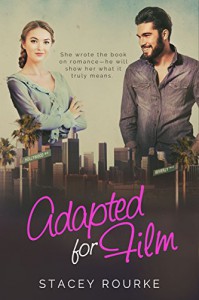 Aubrey Evans is living every author’s dream; her sizzling romance novel is being turned into a blockbuster film. She would be celebrating this momentous event, if she wasn’t busy fighting over every tiny production detail with the maddeningly cavalier director, Kole Camden.
When news of their heated rivalry hits the gossip columns, drastic measures must be taken to save their sinking project. In an elaborate PR hoax, she is publicly linked to Greyson Meyers, the swoon-worthy star of her movie. A whirl-wind love affair is staged for the couple to mirror the steamy chapters of her own books.
Can the introverted author resist the charms of Hollywood’s sexiest leading man? Or will love find her in the City of Angels?

This is a fantastic contemporary comedic romance. I loved it!

Aubrey Evans is a wonderful character. I liked her very much. She is a romance novelist, who lives a vicarious life through her characters. She is an introvert and mostly shy, but due to her success on the bestseller list, her books are very much in demand. Now one of her books, True Love, is being made into major motion picture and her life may never be the same again, especially when she meets Kole Camden, the director, and sparks fly.

This is a fantastic romance story. The story is told narration style by Aubrey to a national reporter as an exclusive. This is certainly a unique way to tell a story. I fell in love with all of the characters, including Mateo Cruz, whose slightly sleezy, never mind cheesy dialogue had me grinning and shuddering in equal measure. Tandy Owens is a great friend and personal assistant to Aubrey. Her more flamboyant personality balanced Aubrey's shyness. I loved their scene in the limo together as they arrived at the movie studio; I could picture that scene with ease. Greyson Meyers is the swoon-worthy star of the movie, whose ego is ginormous but, he also is a very nice man underneath his persona and he takes Aubrey under his wing. The one mystery was Kole Camden. This is one character I really wanted to get to know better. I wanted a bit more of Aubrey and Kole interaction, as their chemistry is extremely palpable. The disagreements were heated and the passion between them burned hot, but they didn't act on their feelings as much as I thought they should have in private. It was like they were friends and not potentially a couple. I think, for me, Kole should have played a bigger role in the story than just someone for Aubrey to throw temper tantrums at when the movie script didn't correspond to her original story line. I wanted him to shut her up with a kiss, but that didn't happen either! However, there is one scene that had me smiling and that's the one with the golf cart, a feather duster and a bottle of milk. Once you read that scene, you'll know what I mean. I seriously thought "O.M.G.!" and burst out laughing. I could picture that scene quite clearly, along with a few others in the book. The story is peppered with the sarcastic humour and wit that I have come to love from this author, and has several twists that kept things interesting. I reached the end of the story and smiled in satisfaction; it almost had a "riding off into the sunset" feel to it with an optimistic happily ever after, which a good romance story should always have. I would love for this book to be actually made into a movie, either for TV or for the big screen. Now, how ironic would that be if it was?

Stacey Rourke has written a fantastically comedic contemporary romance. I love her characters, who are extremely lifelike and feel like friends. I love her writing style, which is fast paced, and the story flows wonderfully. I am a huge fan of this author. The wit and charm she brings to her books makes them a joy to read. I am looking forward to reading more of her books, whether they be YA like her Gryphon Series, Dark Fantasy like her Legend Series or Contemporary Romance such as this one, or any other genre she attempts in the future.