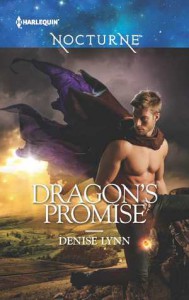 He was a Drake, a dragon. She was a St. George, born to slay them. They were meant to be mortal enemies, yet for three days the shifter and the succubus had been insatiable lovers. From that union a secret child had been conceived. Now Caitlin St. George had to finally tell Sean Drake she'd not only borne his son, but that the baby had been kidnapped. And only Sean could save him…

The tasks in front of Sean were not easy. He'd had to give his family's enemy all he demanded…and then become what he'd feared the most. Would this mission cost Sean the last shreds of his humanity, or could love finally tame the beast within?

This is a wonderful paranormal romance. I loved it!

Sean Drake is a wonderful character. I liked him a lot. He is loyal, loving and sexy. He is the youngest of three brothers, who also happen to be dragon shifters. However, Sean's dragon was woken by magic and he and his dragon half are struggling for control. When Sean meets Caitlin St. George, sparks fly.

Caitlin St. George is also a wonderful character. She is feisty, stubborn and deadly. She's a succubus and a dragon slayer, which makes it awkward when having to swallow her pride and ask for help from Sean, her mortal enemy and father of her child.

I have a huge soft spot for Mills & Boon romances. They were my favourite staple romances as a teen and beyond. I devoured these stories like candy at every opportunity, sometimes reading two or three a day. I must admit that I haven't read one of these for at least three years due to expanding my reading habit into other genres. Thus, it was like coming home when I started reading this book. I had forgotten how much I loved them!

This story is your typically formulaic romance, but there are a few twists that kept it feeling fresh. The story is told through both Sean and Caitlin's points of view, which gives the reader a chance to get to know the characters better. I love the chemistry between the two protagonists. The passion between them is definitely scorching, though not as explicit as some books I have read recently. Sometimes it is nice to have the heat without it being too in the face.

There are some interesting characters introduced too. Braeden and Cam are Sean's brothers' and are quite intimidating in their own way. However, Aunt Danielle is way scarier! Aelthed is a High Druid, imprisoned in an enchanted puzzle box by his nephew, Nathan the Learned. He's been trapped for hundreds of years in spirit form, though he still has his secrets.

This book is full of magic, dragons, danger and romance. I reached the end of the book and sighed in satisfaction. Perfection! I am now looking forward to getting back to reading these books once again.

Denise Lynn has written a fantastic, fast paced romance. I love her writing style, which brought the characters to life. The flow was wonderful too. I would most definitely read more of her books in the future.

I highly recommend this book if you love paranormal romance stories with bite (dragons and vampires amongst others). - Lynn Worton