Fourteen-year-old Josh Anvil is back on Earth, having rescued his grandparents from oblivion. After his interview disaster he returns home to face school finals, nightmares, demanding FBI agents, and teacher clones. Meanwhile the Earth's atmosphere is heating up toward Triassic period levels.
With a new girlfriend and a promise of basketball stardom, Josh's life finally seems to be improving. But is it only the calm before the storm?
Weaved in YA fantasy with elements of action and comedy, Josh Anvil and The Gathering Storm captures the trials of a high school freshman with powerful abilities at his command. 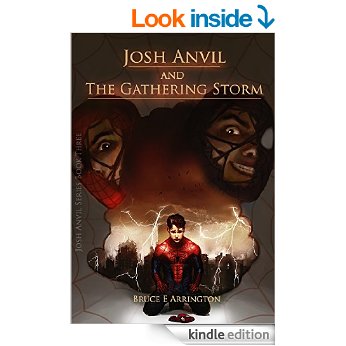 This is the third book in the Josh Anvil Series. I loved it!

Josh Anvil is a fantastic character. I liked him very much from the very first book. He is a smart and curious fourteen (now almost fifteen) year old. Unfortunately, he doesn't see himself the same way. He has low self-esteem, which is caused by his dyslexia and being bullied at school. However, he is an excellent story teller and basketball player, has a vivid imagination and incredible powers thanks to the aliens that saved him after an accident in the swamp where he lives. (Read book 1 to find out how that happens). Now back on Earth after his trip through a portal to alien worlds, he finds himself the subject of ridicule. Will his warning of an alien attack fall on deaf ears?

The story continues from the end of the second book. This story is just as fast paced and exciting as the first two books. There are several twists and turns, and a few surprises that kept me hooked from beginning to end. Josh has grown as a character throughout this series. As well as gaining confidence in himself and his abilities, he has begun to believe in himself too. I have enjoyed watching him gain this confidence and it made me feel proud of him. I also liked meeting his friends Troy, Kodi, Lonnie, Libby, Jana, Axel, Sadie and Marty (the latter seven being humanoid aliens he and Troy had befriended in book 2) again. They each have their own personality, which makes them come alive in the story. We are also introduced to new characters too, such as Josh's new girlfriend, Lisa. I thought that they made a cute couple.

There is action, adventure and danger aplenty in this story and I found myself sitting on the edge of my seat during some scenes. I did feel sorry for Josh and Troy during their television interview at the beginning of the story and felt like slapping the presenters for their attitude. However, if I was in their shoes, I'm not sure if I would believe Josh and Troy's story either.
The cafeteria fight scene was intense and I felt like I was there, amongst the action. New enemies are made and old enemies become friends in this story. This book took me on a roller coaster ride of emotion and when I reached the end of the story I felt sad, but this was only because I wanted to keep reading! The story does end in a small cliffhanger, so I am now looking forward to reading the next book in the series as soon as possible.

Bruce Arrington has written an exciting fantasy adventure. I love his fast paced writing style and the flow is wonderful. I would definitely read more of his books in the future.